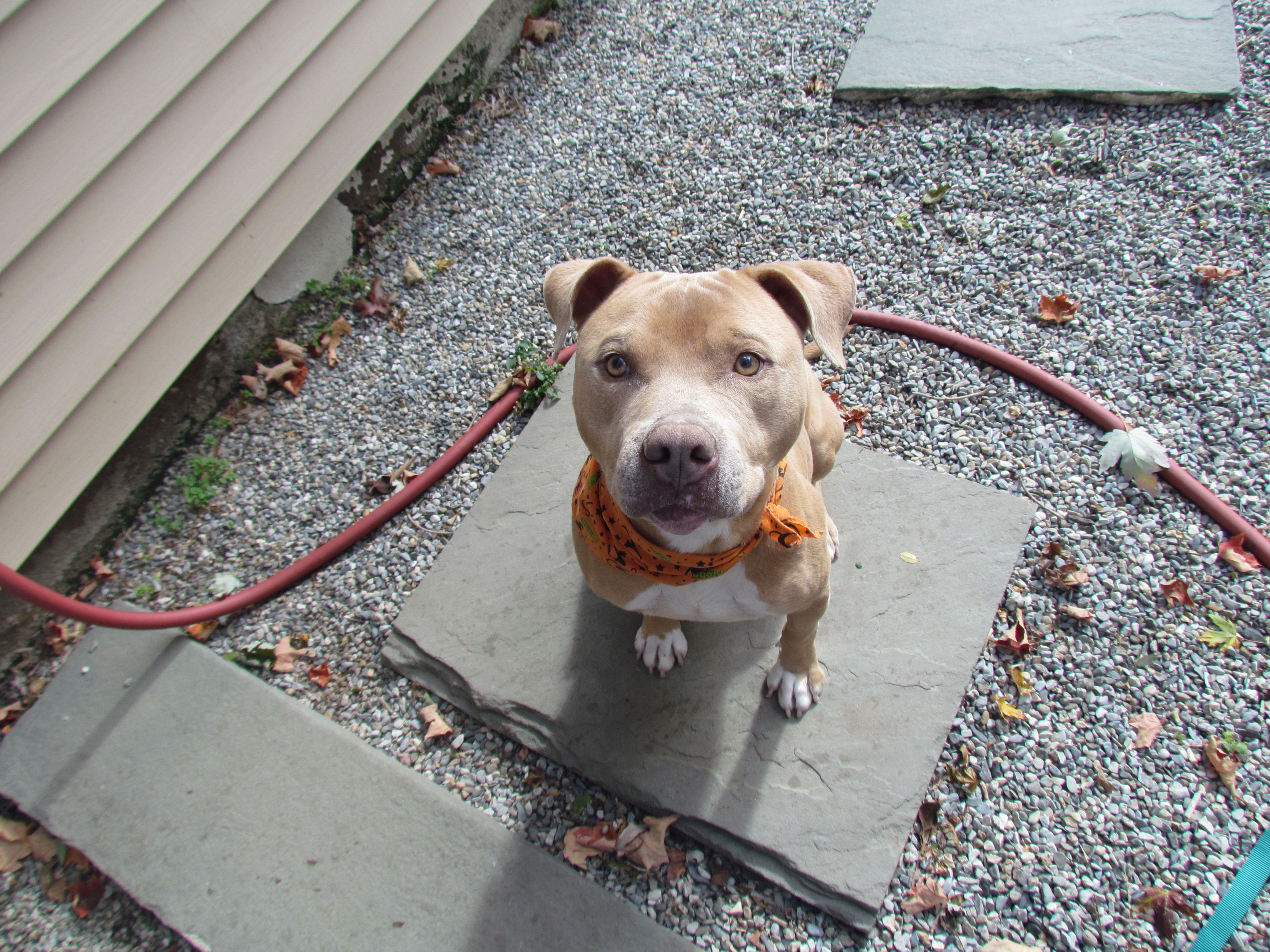 Captain Kirk, reporting for adoptable dog duty! Handsome and smart, Kirk is a bit like an onion: you have to peel back the layers to get to know what an attentive and kind dog he is. His position as one of our office dogs means that Kirk is gaining the experience and skills he would need to transfer into a home of his own. We think Kirk is around 7 years old, and he is a Pit Bull Terrier. Captain Kirk would do mighty fine with a starship crew of his own but would love for them to be mature like himself (older teenagers or adults) and who would not mind making Kirk their one and only. Read more below about why Captain Kirk would be a fantastic addition to your crew!

Like the captain of the Starship Enterprise, our very own Captain Kirk is charismatic, smart and more than capable of having an adventure or two of his own. A fan of laying in the sun, playing tug and making sure we save a bully stick or two for him for later, Kirk is a great dog to have around. He is one of our office dogs, which means that he gets the added benefit of being in a home setting and also helps us with some light filing and answering phone calls. He doesn't quite understand why he hasn't gotten a phone call or two about himself, but he knows that his family is out there in the galaxy and will find him soon! Kirk is easily one of the best office-mates, as he likes to sleep on a bed near the desk or near your feet and always has a fun fact ready for his friends.

Kirk came to us from Yonkers Animal Shelter, where the devoted volunteers had saved money to send him to a trainer in the hopes of getting him adopted faster. They had no idea that the trainer would turn out to be neglectful and also that they would almost lose Kirk due to his training methods. We were able to step in and help Kirk by getting him on a beneficial training plan and help him heal from the abuse he had suffered. He was physically and mentally in terrible shape and we helped him when he needed it most. Now, at 7 years old, Kirk is more than ready for a home of his own. His personality is more than appealing, and his training is sure to wow any potential adopter. He is ready to join you in your minivan just as readily as he is for a spaceship, and is now waiting for his First Mate. Reach out to us today to find out more about Kirk, how to adopt him and what makes him so endearing!

Kirk is part of our Diamonds in the Ruff program, which means that his future family would be getting a fantastic dog that already has the training and skills he needs to transition successfully into a home. Ask our Adoptions Team what being a Diamond in the Ruff dog means and how to adopt one!